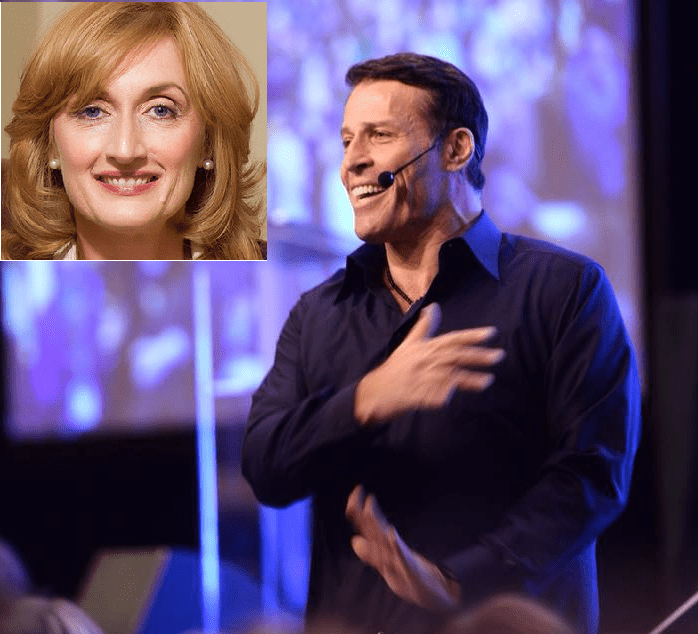 This week we saw a horrendous display of abuse of power by one of the most well-known public speakers in the world—a person who could have chosen to use his platform to usher meaningful change, and instead gave men, abusers, harassers and onlookers a clear out. No need to care about this guys!

Let’s break down how problematic it was:

At his event Tony Robbins mentioned that #MeToo is too angry and is creating victims rather than being something beautiful. A woman in attendance, Nanine McCool, stood up and told him he was mischaracterizing an entire movement and doing it a disservice.

His response to her included:

Here they are talking about a movement that has brought very important attention to violence and harassment of women, and he actually put his fist towards her and asked her to put hers against his and push—and he pushed her, a petite woman, back 10 or 20 feet. NOT ACCEPTABLE.

There was no point to his “demonstration.” That he thought it was clever to physically overpower someone to teach an audience about how to not be a victim is appalling.

But he is Tony Robbins so he can do that and everyone will sit and watch it and accept it, right? Isn’t that how abuse is perpetuated?

He told a story of a man who wouldn’t hire an attractive woman who was the most qualified for a job because of what is happening right now culturally. What is he proposing the solution is? Do we make ourselves unattractive and ugly so we get hired and have a fair shake? Or is he saying if we would just be quiet this would all go away and men could continue to hire and harass attractive women? Seemed that he was suggesting that men are not responsible for their attraction, boundaries and behavior.

Many people cheered Nanine on and clearly agreed with what she was saying. And many got the message that they don’t need to listen to her—or to women—when they raise important objections to the way women who are violated are characterized. This is a form of harassment and it’s unacceptable.

Imagine a different scenario and the impact it could have had:

A woman brings attention to the problematic way Tony Robbins speaks about #MeToo, and rather than needing to be right and hold to his position, he pauses, listens to her, asks her to “tell me more” and takes it in.

Tony acknowledges that sexual violation and harassment is a problem that needs solutions (in line with his teaching) and asks the audience to consider what they can do in their lives, workplaces and communities to create more safety for all.

He shows leadership among men, “Men, it’s important to listen right now. Women are feeling righteous anger and even if it’s hard, we need to listen because there is a reason for that anger and we have a lot of work to do.”

If he chooses to do a physical demonstration he asks permission before touching her, modeling consent.

He vows to create environments that feel safe for women and humbly thanks this woman for helping him see his blind spots or the things he misses because he is a tremendously privileged white, heterosexual man and isn’t always going to catch things. He tells the woman he values her perspective and wants to continue the dialogue.

That could have been a powerful way of bringing people together and helping to bridge the deep gender and racial gaps that are apparent. It could have inspired men who might not otherwise give two pennies to be more vulnerable and willing to stand for women and against sexual violence. It could have made women feel like he is an ally and cares about our well-being.

But that didn’t happen.

He Talked About Victimhood

Let’s talk about victimhood. There is a balance that is necessary and one I strive to find in my teaching and healing work around helping people to overcome victimhood.

Truth: People are victimized. People experience more or less victimizing events based on how much power, access to resources and privilege they have. Denying this fact perpetuates the very things that put people at risk for harm.

Truth: Some people cling to their victimhood and identify so strongly with it that it makes it hard to heal. I’ve had many clients who had to face the parts of themselves that stayed attached to being a victim and prevented themselves from being fully empowered.

Denying people’s trauma and telling them to “get over it” does not help them heal. It makes things worse. And it’s deeply harmful.

Acknowledging people’s pain and witnessing them with compassion is critical to their healing. We can choose to be that compassionate witness or we can turn our backs, or judge them as weak or as “victimy” because they haven’t just gotten over it.

I don’t ever want to compound or create more harm for anyone. I want each student, client, friend, family member who needs support to feel supported by me. I want people to feel heard and listened to. And I want to support them to move beyond the place of victim into full self-empowerment and agency. That is part of healing and it takes more or less time for each person. It’s not anyone else’s job to say how long a person’s healing should take.

Within ourselves, we can question our victim, strive to understand our victim (and we ALL have one) and not let it run the show.

The abusive guru archetype is bubbling over right now and people are seeing through it. It is hard to challenge a guru, an influential teacher. I applaud Nanine McCool for doing so. We all need to speak truth to power.

(Here is the video if you’d like to watch for yourself–it’s still up at least as of this writing: https://www.youtube.com/watch?v=74YILhy4RgE&feature=youtu.be)

Jump on the registration of Fire Woman Retreat here: FireWomanRetreat.com

Amy Jo Goddard is the host of the upcoming Sex, Power & Leadership Online Conference where we will have deep conversations with cutting-edge teachers and thought leaders about #MeToo, power, sexuality, intersectionality and shift the conversation. Register Free at: www.amyjogoddard.com/sexpowerleadership

Thanks for reading! Tony Robbins, Victimhood, Guru-Complex & Leadership originally posted on April 7, 2018 2:27 am. Click Here to read this article in it’s entirety from the source