If a masochist bangs their funny bone, is it good or bad? 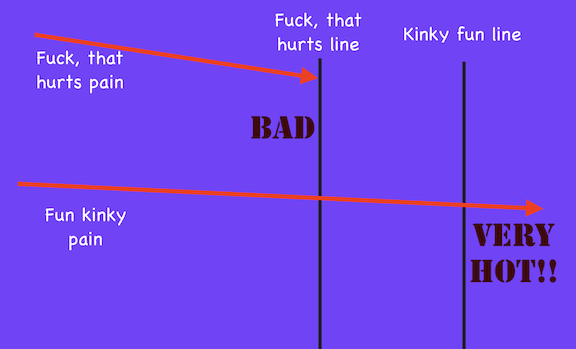 Outside of the playroom though, we respond to pain stimulus just like most other folks. For example, there’s a large under-mattress dresser in our bedroom and it’s built of wood. Although the corners are smooth and rounded, it nevertheless hurts like hell (and not in a good way) when you bang a knee on the corner in the middle of the night.

I need a hammer to smash my thumb, stat!

Masochists don’t walk around stubbing their toe all the time in search of a pain rush. If they accidentally clip their fingernail too short, they react like anybody else and go ‘ouch!’ That sort of pain lacks the context to make it kinky. Without the pain and kinky fun lines crossing, a bruise is just that, and nothing more. Check out this cheesy graphic that we spared no expense in creating:

Did that really hurt, or was it just play pain?

So the next time you hear a masochist exclaim, ‘Fuck, that hurts!’, don’t immediately say to yourself, ‘Yep, they’re having a good time.’ They probably aren’t since the event lacks the fun part, which for us is the context of eroticism.

The post If a masochist bangs their funny bone, is it good or bad? appeared first on The Happy Kinky Couple .