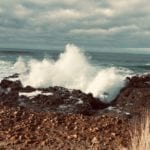 During one of our kinky playdates not long ago, we found ourselves in a very deep and meaningful space together. It was one of those moments when time sort of loses its meaning amidst all of the orgasms, pain, pleasure, and emotions. In our scene, a stern and loving, dominant needed to teach their proud, yet respectful, submissive.

Can this be real?

As we played, something simple, yet profound, occurred. Gazing at each other, one of us smiled, whispering, “this is so much fun.” We shared the joy of doing what we love together. It doesn’t get much better than that. Every once in awhile, we need to refresh the memory of that powerful bond we explored that day in the playroom.

Our sink runneth over

Kinky relationships aren’t inherently easy, but then, neither is life. For example, last weekend we took a short trip to the seashore. (Yes, our kinky suitcase was heavier than all of our other bags, LOL). As we were preparing to depart, we began to wash the dishes. Wouldn’t you know it, but the sink decided in that instant to start leaking, which created a new water feature on the kitchen floor. The dogs loved it, but we, to put it mildly, were not amused.

A few other event happened at home while we sat in the jacuzzi, watched the ocean storms roll in, and ate lots of great seafood. The stove caught fire, so my son reported (it was small and didn’t set off the smoke detectors). Unbeknown to us, our eleven-year old Bouvier suffered a mini-stroke, which we only discovered on our return home.

Before leaving, we planned a deep D/s session for Saturday afternoon. But as the weekend progressed, we were pretty tired from the long beach walks in the brisk winter weather. So we scaled back to a session of jacking and jilling on the floor in front of the fire. Although our play wasn’t even close to what we had envisioned, we still had a great time with plenty of crazy wet orgasms. It doesn’t get much better than that.

Life can sometimes cause us to question whether we’re really kinky, or at least to wonder what in the heck we’re doing. We can’t find the focus, or there isn’t enough time, or our energy level is way down. When this happens, try to visualize the last time you felt that sense of wonder in the playroom with your partner(s). Savor the memory, and reach out to them to say how meaningful that moment was for you…

Because, yeah, it was that good.

The post A shared smile – yeah, it’s that good appeared first on The Happy Kinky Couple .